skip to main | skip to sidebar

24) 'Being Motivated by Goals vs. Fears'

epression has been a national epidemic for more than a decade.  It is usually chemical in nature but affects our mind and spirit.
Many doctors believe in the body-mind connection, in other words that it's all interrelated.
I grew up in the YMCA system whose logo is the body, mind, spirit triangle, so I have a strong bent towards developing and balancing all three.
I have found that the body is often the part least exercised.  And when it is, it is often exercised poorly - everything from incorrect techniques, to intensities that are too low to adequately work the musculoskeletal or the cardiovascular systems.  In turn, this leads to weight gain, depression, anxiety, the inability to breathe well, the inability to lift groceries without back pain, the loss of bone mass/density, and the development, often in women, of osteoporosis.  An exercise regimen also has three components: strength training, cardiovascular exercise and stretching.
When one learns how to exercise, one can also learn to enjoy it, if only marginally.  Then, the body enjoys it independently, building things like muscle memory, increased metabolism, better sleep, and, then, when ignored, cries  for exercise.  You feel good when the endorphins secrete, and the blood pumps, and you feel alive when your muscles and organs are exercised.
I have also found that the mind needs exercise - not just mental exercise to prevent dementia, but repetitive training in healthy thought.  It’s not ‘practice makes perfect’, because you might be practicing wrong; it’s ‘perfect practice makes perfect’.
Being a retired Aquatics Director, I have always been aware of how many swimmers exhibit poor technique that prevent them from achieving a healthy workout.  While performing any long-distance sport, you generally analyze your technique and correct or improve it; you’re constantly monitoring the system and the plan.  Like the body, the brain must be constantly taught and reminded to think healthily.
If you put garbage into a computer, the human body or the mind, you get garbage out.  If you remember from the 1980s with the advent of personal computers: GIGO (Garbage In, Garbage Out).
Whatever you focus on, good or bad, will be what you attract.
So don't you want to attract good things?  Goals are usually good things.  Some may argue, that if you have no goals, you lower the chances of disappointment.  But how then, can you ever achieve anything you want, much less, on purpose, versus by accident.  Most people have goals, or at least dreams.
We must focus on goals for our happiness.
If we focus on fears, like losing a job, getting arrested, never finding love, not losing weight, the computer breaking, or never getting ahead, then that's what you'll probably achieve.
If we focus on running a mile, or eating better (less, more healthy, the right time of the day), or saving money, or learning a skill, or getting a new job, then that’s what you’ll probably accomplish.
You must remind yourself daily, if not more often, of your goals.  It will help you rise above your fears.  If not, you could become scared to cross a street, or sleep with the lights off, or have trouble swallowing because you think others are looking at you.
Keep pictures of your goals, share your dreams with supportive others - dreams are free - so dream big.  Develop objectives, the bite-size pieces that help you to achieve a goal.  Use affirmations, where you repeat to yourself your state of being in the present  as if you have already attained them (e.g. I feel so happy and healthy about my thin, strong body!’).
Financial Planning can help you organize and prioritize your goals & objectives, identify your values, establish target dates, and then make a life plan for systematically achieving your life goals - just like a workout regiment - but maybe easier because you can delegate part of it!
We help people set goals & objectives, analyze their values, make plans and then implement, monitor and manage their plans.  We're there when the going gets tough.  (And we're there to help celebrate.)
Where are you?
Posted by Eric Simons, CFP® at 4:49 PM No comments:

don’t like to be fussy in restaurants, and hassle the wait staff.  I know too many people who make dining out an uncomfortable proposition.
When I dine, I do not want stress; that defeats the experience (I distinguish between dining and simply eating).
It's too easy to stay at home and prepare my own healthy meals, saving money, practicing what I preach, putting my feet up, and controlling my portions, calories and content.
Like on Seinfeld, I went to one of my Upper West Side coffee shops, just blocks from Tom's (the one in Seinfeld).  I got a new waitress whose face constantly remained expressionless in spite of my desire for friendship or compassion (during tax season I rarely get out around people).  I was particularly dismayed because I have frequented the establishment for years.
As usual, I ordered, "water - no ice, coffee, a scrambled egg on a roll w/bacon" - simple, direct, concise; no minced words, no possibility of confusion, a list that makes a hurried, professional,  NYC Greek coffee shop, wait person's life easier.
I wasn't substituting menu items,  customizing an omelet, asking for egg whites, or for the toast to be buttered in the kitchen while still hot; I wasn't  asking to have my food placed on my plate at a precise 37° angle from something else on the plate that it's not allowed to touch.
The waitress proved her understanding by asking, "one egg?"
I said, "yes"; she asked if I wanted cheese.
I said "no cheese" with a horrified look on my face (due to the thought of the punishment my arteries were already about to undertake).
Again, I answered  simply, directly, concisely, and now, with a visual aid.  No intercourse, no chatter.
She immediately brought me an ice-filled glass of water, followed very soon after, by an egg on a roll with cheese.
When I called her back, she became defensive, and tried to blame it on me!  Then, annoyingly she started to repeat, “no problem, no problem”, like a broken American record.
At least she was fast.
However, my experience changed.
I was taught early in life that I have two ears and one mouth, so I should listen twice as much as I talk.
I was also trained to take notes, which she did not.
Working with women in a service business, and having acquired decent communication skills, I have learned to listen.  I also try to 'speak for my listener'.
And, I prefer to do things just slightly slower, and get them right the first time - it's still less time than doing it twice - and it excludes the stress.  It also offers a successful feeling of accomplishment - a job well done.
I wonder what happens to the brain that causes these 'fails', as my young fraternity Brother/assistant from Columbia University calls them.  My Peruvian girlfriend refers to them as the 'lagunas mentales' - the mental lagoons, to which the brain escapes or falls into.
Initially, I take pause: if humans can't correctly do something simple, can they be trusted with something difficult or important?  However, the two performances might not be judged the same way unless there is a previously identified pattern.  Performance may be based on circumstance in addition to behavior and skill.
Nevertheless, the brain recognizes these ‘fails’, and if we're conscious of it, we're reminded that trust is best earned.  A form of disclosure.
I did get a blog out it, and writing things down for me is a cure for getting things out of my head, where I probably spend too much time.
For many, managing money is a scarier topic than managing breakfast; who's your Trusted Family Advisor?
Posted by Eric Simons, CFP® at 7:40 PM No comments: 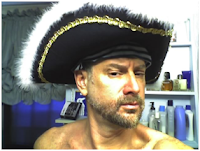 ‘m back. I’m calm and chocolate. Apologies to my loyal readers for my extended hiatus.

It was a challenging 15 months. It was the best of times; it was the worst. Trials and tribulations abound.
My constant companion was WQXR, New York’s revamped classical station.
I reunited with many old friends who either went through life changes (e.g. divorce), moved back to the NYC area, or whom I visited on the Left Coast. I made new friends and connected with family. Many of us having aquatics backgrounds, I made my overdue return to swimming. I’ve been 9 months nursing injured wrists from a cab door colliding with my 10-speed.
After 3 years, the longest beach breach of my life, I returned to the shores of Wildwood Crest, NJ, one of the most beautiful beaches in the world. I returned with my childhood friend who introduced me to the barrier island in the early 1970s. We saw our landlady of 30 years, but who could no longer remember him; I fear it broke his heart. They spent many a summer evening chatting in her kitchen. I also went with my young fraternity Brothers, who had never been there (and I pretended it was 1981).
I experienced my first and second high school circle '2nd Thanksgiving', on the Friday after Thanksgiving, with my classmates from the High School of Music & Art (the 'Fame' school, now La Guardia); we enjoyed 24-hour jam sessions filled with wine, laughter, and song.
I visited the Cloisters for my annual Christmas outing, a ritual initiated by my Dad when I was a kid. I then gathered with HS classmates at The New Leaf Restaurant in Fort Tryon Park to toast the season. I took my annual hike in the New York Botanical Gardens in the Bronx, to reflect upon my year - another ritual, started with a friend now on the Left Coast. I celebrated New Year's Eve with childhood, and new friends, in an Upper West Side pre-war building, and then a New Year’s Day vegan, kosher brunch in Chinatown.
This is my New York, and life according to me, not TV’s ‘Sex and the City’.
I faced the challenges of business, but survived. I built an excellent new team for marketing. We're overhauling our website, planning educational videos, and started an educational MeetUp group, 'Women and Money', which we will inaugurate on Valentine's Day in midtown. (Please join us: www.MeetUp.com, join for free (top right: ‘Sign Up’), then search (top right) 'Women and Money' and sign up.)
I traveled the US researching real estate investments for clients and staying in 5-star hotels. I finally returned to the BWI (British West Indies) for my almost-annual, pre-tax season escape. I sunned, rested, exercised, and enjoyed social intercourse with an international crowd of guests. I hadn’t had a vacation in two years in spite of my attempts to adhere to Free/Focus/Buffer time. Someone died on a SCUBA dive.
I experienced a plethora of deaths, including too many classmates. There was a blur of a half dozen in the two weeks between Western and Eastern Christmas.
There are many changes on the horizon, even if we can't foresee them, such as this years' forecasted sun spot activity (which I'm told already created the highest ultra-violet radiation in the history of humankind, just 10 days ago). And the Mayan Calendar ends on 12/21/2012.
The one constant in life is change, a process to which most people have an aversion, but which we must embrace. The only certainties are death and taxes (- and for me, not being able to get a date).
And of course, the world will end on 12/21/2012 to which the silver lining is that we need not Christmas shop. I've already scheduled my 'End of the World Party' for the Saturday prior.
Although we must live for today, while planning for tomorrow, don't forget to do both - just in case.
But enough about me, how did you like my performance?
Posted by Eric Simons, CFP® at 7:41 PM No comments: